The aim of this blog post is to explain haskell's (specifically, GHC) evaluation model without having to jump through too many hoops. I'll explain how pervasive non-strictness is when it comes to Haskell, and why compiling non-strictness is an interesting problem.

We first need a toy example to work with to explain the fundamentals of non-strict evaluation, so let's consider the example below. I'll explain the case construct which is explained below. Don't worry if ato lazy evaluation "looks weird", it feels that way to everyone till one plays around with it for a while!

We will interpret this example as both a strict program and a non-strict program. This will show us that we obtain different outputs on applying different interpretations.

A quick explanation about case:

case is a language construct that forces evaluation. In general, no value is evaluated unless it is forced by a case.

If we were coming from a strict world, we would have assumed that the expression K one loopy would first try to evaluate the arguments, one and loopy. Evaluating one would return the primitive value 1, so this has no problem.

This is because, as programmers coming from a strict world, we assume that values are evaluated as soon as possible.

So, the output of this program is to have the program infinite-loop for ever, under the strict interpretation.

In the non-strict world, we try to evaluate K(1, loopy) since we are asked the result of it by the case expression. However, we do not try to evaluate loopy, since no one has asked what it's value is!

Now, we know that

regardless of what value loopy held.

So, at the case expression:

kret = one, we can continue with the computation.

Here, we force kret (which has value one) to be evaluated with case kret of.... since one = 1, i is bound to the value 1. Once i is returned, we print it out with printPrimInt(primx).

The output of the program under non-strict interpretation is for it to print out 1.

Where does the difference come from?

A value is said to be bottom if in trying to evaluate it, we reach an undefined state. (TODO: refine this, ask ben).

Now, if a function is strict, it would first evaluate its arguments and then compute the result. So, if a strict function is given a value that is bottom, the function will try to evaluate the argument, resulting in the computation screwing up, causing the output of the whole function to be bottom.

Formally, a function f is strict iff (if and only if) f(bottom) = bottom.

Conversely, a non-strict function does not need to evaluate its arguments if it does not use them, as in the case of K 1 loopy. In this case, f(bottom) need not be equal to bottom.

Formally, a function f is non-strict iff (if and only if) f(bottom) /= bottom.

As Paul Halmos says, " A good stack of examples, as large as possible, is indispensable for a thorough understanding of any concept, and when I want to learn something new, I make it my first job to build one.". Let us consider some examples.

id is strict, since id(bottom) = bottom.

This is a neat example showing how a function can be strict and lazy in different arguments of the function.

How does GHC compile non-strictness?

GHC (the Glasgow haskell compiler) internally uses multiple intermediate representations, in order of original, to what is finally produced:

Here, I will show how to lower simple non-strict programs from a fictitous Core like language down to C , while skipping STG, since it doesn't really add anything to the high-level discussion at this point.

Our example of compiling non-strictness

Now, we need a strategy to compile the non-strict version of our program. Clearly, C cannot express laziness directly, so we need some other mechanism to implement this. I will first code-dump, and then explain as we go along.

This is a straightforward way to encode non-strictness in C. However, do note that this is not lazy, because a value could get recomputed many times. Laziness guarantees that a value is only computed once and is later memoized.

Therefore, GHC opts to manage its own call stack on the heap. The generated code looks as you would imagine: we maintain a stack of function pointers + auxiliary data ( stack saved values), and we push and pop over this "stack". When we run out of space, we <find correct way to use mmap> to increase our "stack" size.

I've played around with this value a little bit, and have found that the modern stack size is quite large: IIRC, It allowed me to allocate ~26 GB. I believe that the amount it lets you allocate is tied directly to the amount of physical memory + swap you have. I'm not too sure, however. So, for my haskell compiler, sxhc, I am considering cheating and just using the stack directly.

Code for the same example (with the K combinator) is provided here.

we maintain our own "call stack" of continuations. These continuations are precisely the parts of the code that deal with the return value of a case. ever

That is, push a continuation, and then "enter" into x.

One might have a question: does this still not use the call stack? There is a function call at the end of most functions in the source code, so in theory, we are using the call stack, right? The answer is no. It's thanks to a neat optimisation technique called tail call elimination. The observation is that after the call, there is no more code to execute in the caller. So, by playing some stack tricks, one can convert a call to a jump.

Remember, a call instruction uses the stack to setup a stack frame, under the assumption that we will ret at some point. But, clearly, under our compilation model, we will never ret, simply call more functions. So, we don't need the state maintained by a call. We can simply jmp.

I hope I've managed to convey the essence of how to compile Haskell. I skipped a couple of things:

All of this is documented in the excellent paper: Implementing lazy languages on stock hardware.

I have use the word non-strict throughout, and not lazy. There is a technical difference between the two, which is that:

We expect that the program will never evaluate y=loop because f does not use y anywhere. We want the program to return the answer:

However, we don't really care if the program is evaluated as shown here, using lazy evaluation, (where the blue color indicates what is being evaluated): 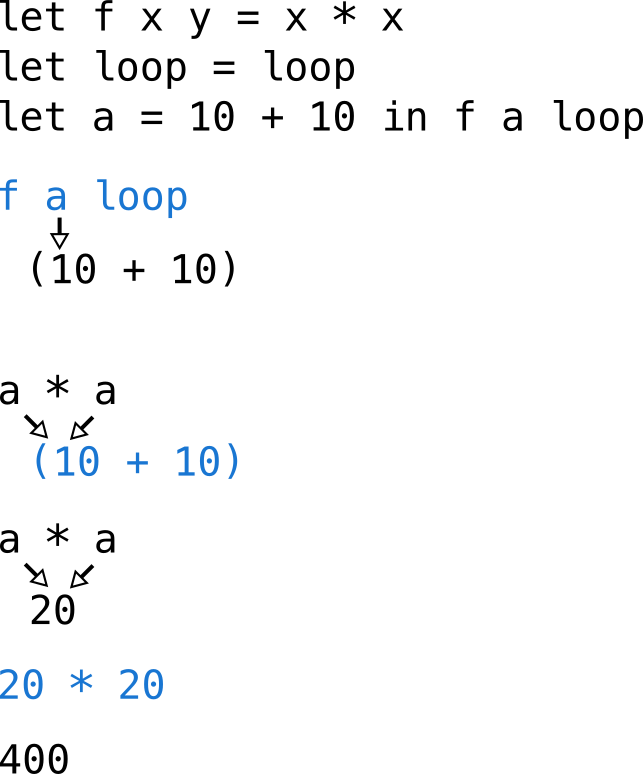 or it's being evaluated as shown here, where the expression a is evaluated twice: 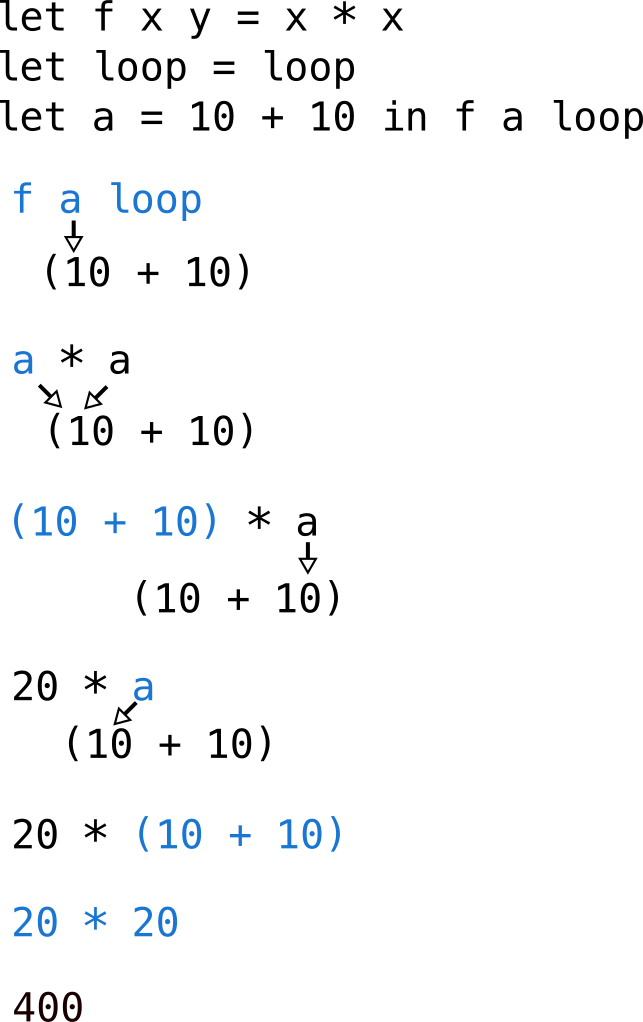 See that both these programs compute the same answer, but do so differently. In the former case of lazy evaluation the variable a is shared across both occurences: it is computed once, and the result is reused. In the latter case of non-strict evaluation, we see that the variable a is evaluated twice independently, once for each occurrence of a.

There are trade-offs with both approaches. In the lazy evaluation case, we are guaranteed that a large expression will not be evaluated twice. On the flip side, in the case of non-strict evaluation, since we can evaluate the same expression multiple times, we can exploit parallelism: Two cores can conceivably compute 10 + 10 in parallel to arrive at 20. This is in contrast to the lazy evaluation case where this is not allowed, since the compiler must guarantee that an expression is evaluated at most once. If the same expression 10 + 10 is evaluated on two cores (in parallel), it is still evaluated twice! So there is a trade-off between guarantees to the end user (that an expression will not be evaluated twice), and freedom for the compiler (to evaluate in parallel). This is a common theme in language and compiler design, and one I find very interesting.

See other articles by Siddharth