In many dating apps, the focus is on perfect pics. But Lex has succeeded by doing something truly novel: focusing on words.

“It’s important to be able to start a relationship based off a personality more than a photo,” says Kell Rakowski, who in 2019 founded the dating app turned social network for queer, trans, and gender-nonconforming people. “Language is so important to the LGBTQ+ experience—words are almost a subculture within themselves.”

Lex, which is 100 percent queer-owned and operated, is powered by a quietly revolutionary motto: “Text first, selfies second.” You won’t find pictures in Lex—all its posts are text-only, presented in a lo-fi aesthetic. 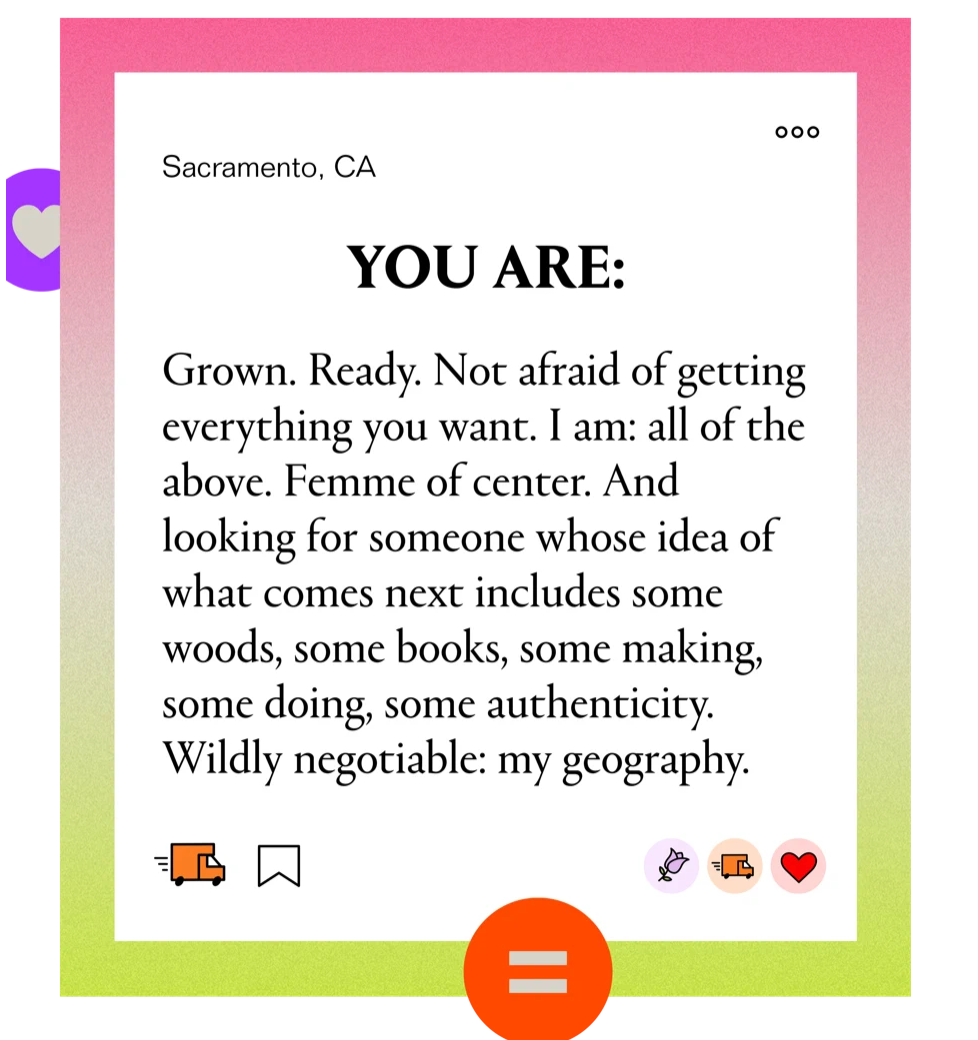 Kell Rakowski founded Lex for “queer, trans, gender nonconforming, two-spirit, and nonbinary people.” “I liked the idea that everyone could check out each other’s identities,” she says. “It’s just a beautiful mix.”

That’s part of what drew Lex users Katherine Bernard and Lily Olsen, who met via the app not long after it launched. “I didn’t necessarily download it to use as a dating app,” says Olsen, an artist living in New York City. “It just seemed like an incredible way to meet people.”

Still, she couldn’t help feeling drawn to Bernard’s post riffing on a popular lesbian movie. “I just found it so funny,” says Olsen. “It was a better point of connection than an attraction to an image. It gave us a really good starting ground.”

The pic-free approach is key to that depth of connection—and core to her app, says Rakowski. She grew up in a sleepy expanse of upstate New York, where she spent much of her time in text-heavy AOL chat rooms. “And it was fine!” she says. “You still got your personality across.”

Lex posts hit a sweet spot between substantive and succint, says Rakowski. “This personal has passion and horror! The popcorn jelly bean—so much there to debate and dig into.” Rakowski came out seven years ago when she was working as an art-book designer and magazine photo director in New York City. But even there she struggled. “I really felt like I was living in a straight world,” she says.

So she started curating a lesbian-culture social media account as a way to teach herself about lesbian history. Through that process, Rakowski came across the classifieds-style personal ads in a vintage lesbian-erotica magazine that would later inspire Lex.

“The women described themselves in a way that was superhot and superpowerful, but also really funny,” she says. “They set it out like, ‘This is who I am.’ I found that really empowering.”

To show your love, tap the icons on the bottom right. “Who doesn’t love someone wearing socks with pickles?” says Rakowski. “Irresistible.” Rakowski asked her social media followers to submit their own dating classifieds, and the response was overwhelming. “I was getting 500 submissions every month,” she says. “That’s when I thought, ‘This should become an app.’”

She launched Lex in 2019, maintaining that signature text-forward style. “It was important to me to have that throwback aesthetic, the grittiness of the ’90s and zine culture” she says. “But I also wanted a timelessness. We’re not literally trying to look like a newspaper; we’re harkening back to it, while keeping that edge.”

Today users are forging connections of all kinds. “People are setting up sports teams, finding housing, hosting book clubs,” Rakowski says. “We’re here for the daters but also for finding a group to go birding with in Central Park.”

A typically atypical Lex post. “Direct and to the point!” says founder Kell Rakowski. “This is a dynamic personal that says a lot in only so many words.” After Mikaela Berry, a writer and justice coordinator in Harlem, posted an ad for friendship, she met Zoe Wheatly, a high school teacher. “I didn’t hear about Lex until I directed a play about lesbians and it was mentioned,” says Berry. “I was like, ‘How did I not know about this sooner?’”

When Berry dived in, she found people “aching for community,” she says. “It’s hard to find your people as a queer person. This is a space where you can ask for that.”

Even though Bernard and Olsen have been dating for more than a year, both have kept the app. “It’s fun to have a place to meet that isn’t about your physical embodiment,” says Olsen.

You must be at least 17 years old to download this app. Apps in this category may contain sexual content, mature themes, and alcohol, tobacco, or drug use references.

See other articles by Kelly