Through the Looking Class: Contravariant Functors and Applicatives

In this blog post, we will learn about Contravariant and Divisible which provide duals for Data.Functor and Data.Applicative respectively.

First, a quick recap of functors:

Let us look at some example to build our intuition of such a typeclass.

The classic example is that of a predicate, which is something that tells us whether a value of type t obeys some property or not:

An example of such a thing is if we know how to check a real number is greater than zero:

and we can converts integers into reals:

then we can check if an integer is greater than zero:

This is described by the picture:

Recall that an Applicative allow us to work with tuples:

We can write the type of liftA2 to be more suggestive as:

The dual, called Divisible, says that if we can break a value c into (a, b), then we can glue lifted values (f a, f b) into a lifted f c.

The conquer is some sort of "default procedure" we can perform for any value. It'll be something benign, as we'll see when we check out the examples. 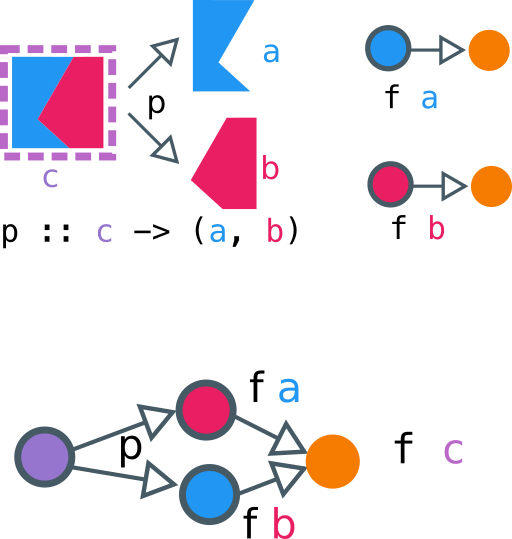 Above, we have a picture of how to think about Divisible. The box with pink-and-blue is a c, that contains an a and a b. We have a function p that shows us how to split a c into an a and a b. We also have f a and f b, which consume a, b to produce some orange output. If we have this data, we can build an f c, something that can consume a c, by (1) splitting c into (a, b), and then consuming the (a, b) using f a and f b.

As for when we know nothing, we could either allow it or disallow it. In this case, since we are && ing information, the way to be "benign" is to allow things (that is, return a True). Since True && b = b, we are sure that the conquer is indeed benign.

Consider the ability to convert a data type to a string. These "consume" the (varying) data types to produce a String. So, for example:

As for conquer, if we don't know how to print something, the best thing to do is to not print anything at all. This prevents us from garbling output. Thus, the benign choice for conquer is to print an empty string:

We can put Serializer work immediately. For example, say we know how to serializer Ints and Floats:

If we now have a type that contains Int and Float, no problem! Divisible has our back to combine the Serializers together:

For the divide, we combine the data from a and b using the monoid of y:

For conquer, the "benign instance" is the mempty value of the monoid, which by definition does not "interact" with any element, as mempty <> m = m and m <> mempty = m:

In all of these examples, we have (a) A data structure that can be decomposed: this is the part of c -> (a, b), and (b) A consumer of data: f a is "something that can consume an a.

The laws for Contravariant

So far, I have been skating on intuition, without telling you what the laws Divisible must follow are. Let's get formal now. For a given Contravariant f, we need a fmap-like law to hold:

See that the order gets flipped in comparison to fmap. Let us check that this law holds for Into y, since that was the most general example.

We can rewrite our Into y definition to be easier to manipulate using point-free style:

if we now try to simplify:

thus we are done! We've shown that the Contravariant laws hold for Into

The laws for Divisible

The laws follow from some category theory. We need that for the function:

the following relations between divide and conquer hold: 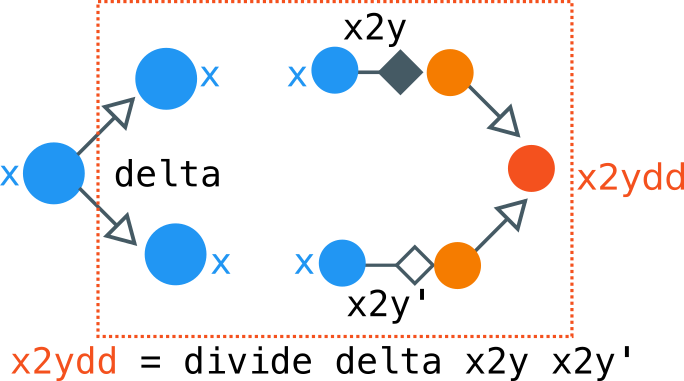 See other articles by Siddharth